As Indian navy grew into a truly three dimensional navy in the early 1980s, operational sea training (OST) was recognized as a necessity. By 1982, Warship Work Up Organisations (WWOs) were set up at Bombay on the Western Seaboard and at Visakhapatnam on the East Coast. With further growth of the navy WWO concept was expanded in size and scope in 1992, and an independent organisation of Flag Officer Sea Training (FOST), headquartered at the Naval Base in Kochi in the South Western state of Kerala was established. Within a short period of seven years FOST organisation has evolved into a useful catalyst for improving role-worthiness and combat capabilities of warships with a variety of different weapon and sensor fit.

The Work UP Teams

The Work UP TeamsThe teams at Mumbai and Visakhapatnam are referred to as Local Work Up Team (West) and Local Work Up Team (East) respectively. They are capable of undertaking OST of all classes of ships below Corvette size such as Seaward Defence Boats, Missile Boats, Anti Submarine Patrol Vessels, Ocean Going Tugs etc. The team at Kochi, referred to as the Indian Navy Work Up Team (INWT), is earmarked for undertaking OST of all types of major warships including Aircraft Carriers, ASW and Guided Missile Destroyers, Frigates and other fleet units. 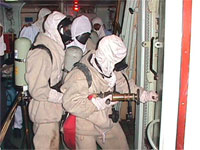 On a ship reporting for OST, she is put through her paces during structured exercises followed by quizzes and written tests in all disciplines to assess the take off level of the individual crew members and the whole ship. The work up tasks are then tailored to meet individual ship requirements.

Methodology of Sea TrainingThe Operational Sea Training imparted under the overall supervision of FOST thus ensures a comprehensive and systematic progression of the ship to achieve the prescribed performance standards to undertake the designed role of the ship and streamline ship management in totality. At the end of each work up schedule FOST conducts an operational readiness assessment at sea and certifies the ships operational status highlighting those areas that need continuation training/attention.

OST is undertaken in four phases in harbor and at sea covering single ship, multi-ship and ship/submarine/aircraft multi-dimensional operations.