A Seminar themed ‘Transforming Conventional Missiles for Tomorrow’s Wars- Opportunities and Challenges’ is scheduled to be held on 26 Mar 21 at INS Kalinga.

Papers invited from DRDO and Defence PSUs and Industry on topics related to Missile Design/ Maintenance/ Production on following topics: -

1. Self Reliance in Missile Technology

4. Uniformity, Portability and Scalability in Missile Technology – A Need of the Day 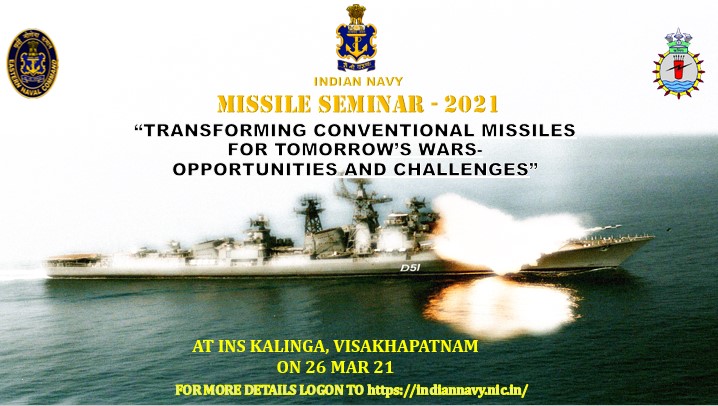 TOPIC – I
Self-Reliance in Missile Technology

1.    India’s missile capability received a major fillip from the Defence Research and Development Organisation (DRDO) following the launch of the Integrated Guided Missile Development Programme (IGMDP) in 1983. The aim was to develop a family of strategic and tactical guided missiles based on local design and development. Missile and Strategic cluster of DRDO has successfully developed Agni (1,2,3,4,5,6), Prithvi 1,2 and 3, Dhanush and other intermediate/long range ballistic missiles that are operational and  act as deterrents to inimical foreign powers. BrahMos has proved itself to be a potent weapon and is amongst the world’s best SSMs, enabling it to strike from various types of land, sea and air-based platforms.

2.    India’s missile programme represents sovereignty and self-reliance towards enhancing national defence capability. With a rapid and robust upgrade of its arsenal of missiles and embrace of indigenous technology, India is thus not only helping strengthen peace and stability from the Himalayas to the Indo-Pacific but also boosting its self-reliance in matters of national security. Development of indigenous missiles, apart from boosting self-reliance in defence of the nation, can also enhance technical knowhow, provide jobs, result in foreign exchange savings and when exported can provide considerable earnings to the national exchequer. It is possible to create the necessary capabilities within the country to meet the military requirements and achieve the goal of self-reliance, provided we bring about radical changes to the existing procedures and setup. India has enough entrepreneurial potential and technical skills and if given the required incentives and push, it can measure upto military demands.

1. The strategic landscape of South Asia region is predominantly defined by the complex interactions between, India and its neighbouring states. India’s geo-political situation is largely effected by the relations with China on north-east and Pakistan on the western front. China is progressing aggressively with development and deployment of advanced unmanned weapon systems which have stand-off engagement capability. China has developed Chang Jian series Land Attack Cruise Missiles (LACMs), Dong Feng series ballistic missiles with capabilities of bringing down carriers and ships, and extended range Surface to Air Missiles with ranges upto 200 km. Yagon series defense satellite system further strengthens China’s standoff capability.  Beijing’s intimate relationship with Islamabad, is a cause of concern on the western front too.

2. IN has been inducting platforms with advanced weapon systems, which has boosted its fire power and deterrence capability. But import of weapon technology came with a cost of requirement of OEMs’ support for spares and repairs. With current economic conditions, accompanied with a volatile geo-political situation, it will be of great importance to relook into arsenal of missiles that IN holds. The missiles in our arsenal need to be capable of matching up to threat posed by our immediate adversaries. We also need to pay emphasis on development of indigenous missiles to meet our requirements and reduce our dependence on direct procurement of weapons/ missile systems. Indian private partners need to be engaged in our endeavour by means of Transfer of Technology and in-house production of foreign missile systems. Therefore, there exists a critical requirement to have a relook at our missile policy, towards achieving our primary aim of having ‘Ordinance on Target’.

1. The militaries of the world have stepped up usage of precision missile system for strike operation and demand for pin-point accuracy has only witnessed an upward trend. A key contributor towards achieving all of the above has been the advancement in technology, which has resulted in improvements in missile ranges, firepower, accuracy, manoeuvrability and lethality.

2. The key aspects that function as design drivers of any guided weapon system that missile manufactures aim at delivering are Accuracy, Range and Speed. A few emerging technological trends in development of advanced missile systems, aimed at increasing the accuracy, range and speed of the missile are as follows:-

(a) Adaptive Missile Guidance for Better Accuracy.   Incorporation of GPS and other advanced Guidance Systems in new generation missiles have resulted in improvement of the navigational and surveillance abilities, and are being increasingly preferred by militaries.

(b) Reduction in Size and Weight for Increased Range.    Requirement of miniaturisation has led to development of advanced technologies, such as usage of microelectronic components which significantly reduce the weight of the entire missile system. This can drastically improves the range, while maintaining the original lethality of the missiles.

(c) Development of High Speed Hypersonic Missiles.   Development of Hypersonic Missile, is gaining momentum. India has become one of the few nations having the ability to develop hypersonic missiles, with DRDO successfully demonstrating air-breathing scramjet technology, with flight test of Hypersonic Technology Demonstration Vehicle. BrahMos-II being hypersonic cruise missile, currently under joint development by India and Russia, will be a significant force multiplier for the Indian Military.

TOPIC – IV
Uniformity, Portability and Scalability in Missile Technology
A Need of the Day

1. Considering the developments in technology, need of the day is Uniformity, Portability and Scalability in the Missile Technology. A variety of missile systems are being used by the three service arms, with different kind of platform and system requirements. This has resulted in development of missile systems of various range, calibre applications etc. The notion of Portability, Uniformity and Scalability as enumerated in succeeding paragraphs is vital for effective management of missile arsenal and needs to be addressed.

2. Portability.    The missile system should have flexibility of installation and interfacing with variety of platforms, thus making it portable to be utilised as per the requirements.

3. Uniformity.    The missile systems being developed need to have uniformity in their design, functioning and system requirements, so as to provide an option of simply plug and play. A standardised system will not only result in lower production costs, due to economy of scale, but will also result in ease of life cycle maintenance.

4. Scalability.    The missile system may be used with concept of Scaling. A system developed may be designed with basic requirements to be used on a smaller platform.  Further, based on the success rate, precision and lethality the requirement can be scaled to meet requirement of bigger platforms. This would not only have a common system across the board but also enable easy troubleshooting, operation and maintenance.