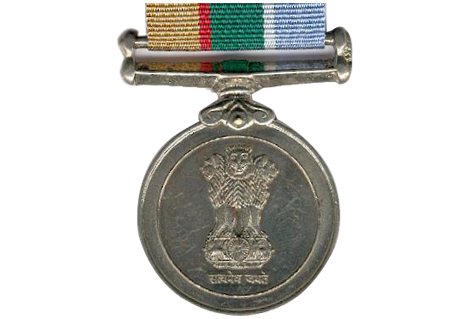 No. 16-Pres/2005 – The President is pleased to institute a medal for recognition of the services of Armed Forces personnel and civilians in the ‘OP PARAKRAM in 2001; and in this behalf, to make, and establish the following ordinance

Firstly The medal shall be styled and designated the “OP PARAKRAM MEDAL” (hereinafter referred to as the medal).

Secondly The medal shall be circular in shape, made of cupro-nickel, 35mm in diameter and fitted to a plain horizontal bar with standard fittings. It shall have Map of India and inscription “ OPERATION PARAKRAM” embossed both in Hindi and English along the rim. On its reverse it shall have State Emblem embossed in a circle. A sealed pattern of the medal shall be deposited and kept.

All personnel from ships, submarines, aircraft, coast batteries and coastal defence forces, War Watching, Naval Control of Shipping, Examination Services, including Coast Guard units that were deployed at sea in the Indian Ocean, Arabian Sea and the Bay of Bengal including the Andaman Sea and involved with operational activities of OP PARAKRAM.

Seventhly It shall be competent for the President to cancel and annul the award of the medal to any person, and also to restore it subsequently.

Eighthly It shall be competent for the Govt to frame such instructions as may be necessary to carry out these ordinances.